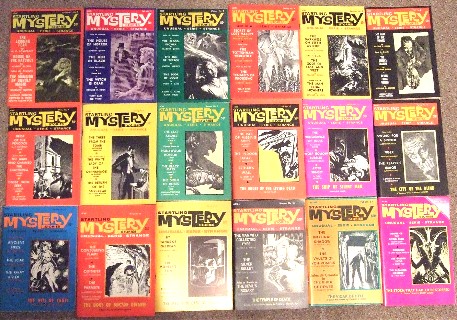 ---------18 volumes (ONE SHIPPING PRICE ), all are Near Fine copies, ----dandy copies ideal for the serious collector, some volumes have a bit of browning to the paper, short corner crease on volume 18, the 2 most important issues are the STEPHEN KING issues, they are not only desireable but surprisingly scarce in comparison to the other volumes, volume 1 # 6 contains: My Lady of the Tunnel by Arthur J Burks; The Glass Floor by Stephen King; Death from Within by Sterling S Cramer; A Vision (verse) by Robert E Howard; Aim for Perfection by Beverly Haaf; The Dark castle by Marion Brandon; Dona Diabla by Anna Hunger; The Druid's Shadow ( Jules de Grandin ) by Seabury Quinn; ---volume 2 # 6 contains: The Woman with the Velvet Collar by Gaston Leroux; The Reaper's Image by Stephen King; Sirrush (verse) by L Sprague de Camp; Sword for a Sinner by Edward D Hoch; Tiger by Bassett Morgan; The City of the Blind by Murray leinster (aka Will Jenkins ), ---THE GLASS FLOOR by King is his first professionally published piece and pre-dates his first book, Carrie, by a full 7 years, both of the King issues are quite scarce especially the 1st issue, ---VOLUME 1 contains: Village of the Dead by Edward D Hoch; House of the Hatchet by Robert Bloch; The Off Season by Gerald W Page; The Tell Tale Heart by Poe; The Lurking Fear by H P Lovecraft; The Awful Injustice by S B H Hurst; Ferguson's Capsules by Derleth; The Mansion of Unholy magic by Quinn ---VOLUME 2 contains: House of Horror by Quinn; The Men in Black by John Brunner; The Strange Case of Pascal by Hoch; Doctor Satan by Paul Ernst; Secret of the City by Terry Carr & Ted White; The Street by Lowndes; Scourge of the B'Moth by Bertram Russell ---.VOLUME 3 contains: The Inn of Terror by Gaston Leroux; The Other by Lowndes; The Door of Doom by Hugh B Cave; A Matter of Blleding by Ralph E Hayes; Esmerelda by Roma Wells; The Trial for Murder by Charles Collins & Charles Dickens; The Blood Flower by Quinn ---VOLUME 4 contains: The Tottenham Werewolf by August Derleth; The Secret of Lost valley by Robert E Howard; Medium for Justice by Victor Rousseau; Si Urag of the Tail by Oscar Cook; The Temptation of Harringay by H G wells; The Tenants of Broussac, a Jules de Grandin story by Seabury Quinn ---VOLUME 5 contains: Gods of East & West by Quinn; The Council & The House by Lowndes; Behind the Curtain by Leslie Jones; A Game of Chess by Robert Barr; The man from Nowhere by Hoch; Darkness on Fifth Avenue by Leinster ---VOLUME 7 contains: Bride of the Peacock by E Hoffman Price Nice Old House by Dona Tolson; Those Who Seek by Derleth; John bartine's Watch by Ambrose Bierce; The Pet of Mrs Lilith by Tobert Barbour Johnson; The Man Who Changed the Lightning by paul Ernst; ---VOLUME 8 contains: The White Lady of the Orphanage by Quinn; The Gray People by John Campbell Haywood; And Then No More by Jay Tyler; The Endocrine Monster by R Anthony; The Return of the Sorcerer by Clark Ashton Smith; The Three from the Tomb by Edmond Hamilton ---VOLUME 9 contains: The Black Mass by Colonel S P Meek; The Last Archer by Earl Pierce Jr.; The Sight of Roses by Jay Tyler; Acrophobia (verse) by L Sprague de Camp; Webbed hands by Ferdinand Berthoud; Hollywood Horror -a Dr Satan novelet by Paul Ernst ---VOLUME 10 contains: The House of the Living Dead by harold Ward; The Indoor Safari by Max Nugor; The House Party at Smoky Island by L M Montgomery; Settler's Wall by Lowndes; The Isle of Missing Ships, a Jules De Grandin Story by Seabury Quinn ---VOLUME 11 contains: Wolf Hollow Bubbles by David H Keller; Mrs Kaye by beverly Haaf; The Haunter of the Ring by Robert E Howard; The Vengeance of India, a Jules de Grandin story by Seabury Quinn; After Sunset by Philip Philip Hazleton; The Ship of Silent Men by Philip M Fisher; The Whisperer (verse) by Lowndes ---VOLUME 13 contains: The Gray Killer by Everil Worrell; The Scar by J Ramsey Campbell; Where ther's Smoke by Donna Gould Welk; Ancient Fires, a Jules de Grandin story by Seabury Quinn; The Cases of Jules de Grandin, a Chronoligical listing of the the first 50 stories by Lowndes (includes some b&w Weird Tales covers); The hansom Cab by Ken Porter ---VOLUME 14 contains: The Dogs of Doctor Dwann by Edmond Hamilton; The Parasite by Dorothy Norman Cooke; The Outsider by H P Lovecraft; The Crawler (verse) by Lowndes; The White Domino by Urann Thayer; The case of the Dr Who Had no Business by Richard Lupoff; The Feline Phantom by Gilbert Draper; The Consuming Flame, a Dr Satan story by Paul Ernst ---VOLUME 15 contains: Horror Insured by paul Ernst; By Hands of the Dead by Francis Flagg; The Monkey's Paw by W W Jacobs; Cry Baby Cry by henry Slesar; The Man who cast no Shadow by Quinn; The Cases of Jules de Grandin (continued ) --- VOLUME 16 contains: The Smell by Flagg; The Temple of Death by David keller; The Silver Bullet by Phyllis Whitney; The Man Who Collected Eyes by Eddy C Bertin; The Devil's Rosary by Quinn ---VOLUME 17 contains: The Infernal Shadow by Hugh B Cave; The Vaults of Yoh-Vombis by Clark Ashton Smith; Laura by Joseph H Bloom; The Vicar of Hell, a Simon Ark story by Edward D Hoch; The Bride of Dewer, Jules de Grandin story by Seabury Quinn ---VOLUME 18 contains: Drome of the Living Dead by John Scott Douglas; The Editor's Page - On Nero Wolfe; Conjured by Larry Eugene Meredith; The Golden Patio by Aubrey Feist; The Cleaning Machine by F Paul Wilson; The Storm That Had to be Stopped by Murray Leinster (aka Will Jenkins ), it would be hard to imagine a nicer set, overseas shipping (outside of Canada and the USA ) will require additional postage,, any image directly beside this listing is the actual book and not a generic photo ///NOT SIGNED ---GUARANTEED to be AVAILABLE///

Illustrator: Virgil Finlay and Others