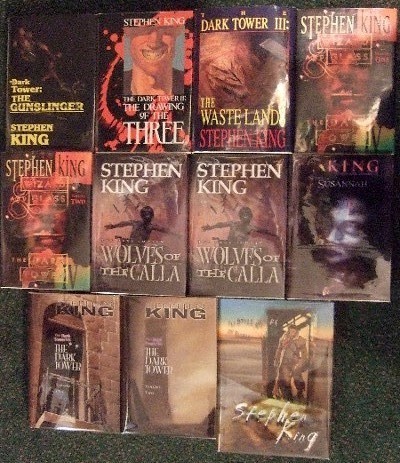 -----------12 volumes for the 9 book series, hardcovers, all are Fine copies in Fine dustjackets, these look new but close, close inspection MIGHT reveal TINY marks to a jacket but honestly these are incredibly sharp copies and virtually as issued, WIZARD volume ONE is an unread copy but there is a very-hard-to-see mark on the rear panel so that was likely done by the publisher whilst being handled for shipping, WASTE LANDS is also unread but has a slight ripple on the spine from an old mylar protector which "shrunk" and caused a bit of rippling, all of those old mylar protectors have been removed and have been replaced by new hi-quality mylar protectors, WIZARD, CALLA and TOWER are two-volume sets as issued ( thus 12 volumes for the 9 book series ), all books have been SIGNED by KING and the artist for that volume (although WIZARD, CALLA and TOWER have book ONE of each two-volume set signed and numbered only), all are # 433 of the limited editions, so all are signed and numbered with the same # 433, all housed in Near Fine/Fine slipcases, a couple of slipcases have a wee bit of very light rubbing and a bit of fading along edges from a bit of sunning, The Wind Through the Keyhole is still in shrinkwrap and is therefore Very Fine, this is the complete GUNSLINGER / ROLAND DESCHAIN series with the first 7 books comprising the bulk of the story, ELURIA contains a story about Roland and the Man in Black which pre-dates (in story, not publication) the GUNSLINGER (about 90 pages), as well ELURIA contains an expanded version of The GUNSLINGER, KING has written about this expanded edition ---"What I did want to do was to give newcomers to the tale of the Tower (and old readers who want to refresh their memories) a clearer start and a slightly easier entry into Roland’s world. I also wanted them to have a volume that more effectively foreshadowed coming events. "---, KEYHOLE is the newest addition to the cycle having been released in 2012, you are likely never to see another set like this offered, --- An order from outside of the US or Canada cannot be accepted due to the impossibility of satisfying the necessary export requirements and documentation ---apologies for this, any image directly beside this listing is the actual book and not a generic photo ///SIGNED ---GUARANTEED to be AVAILABLE///