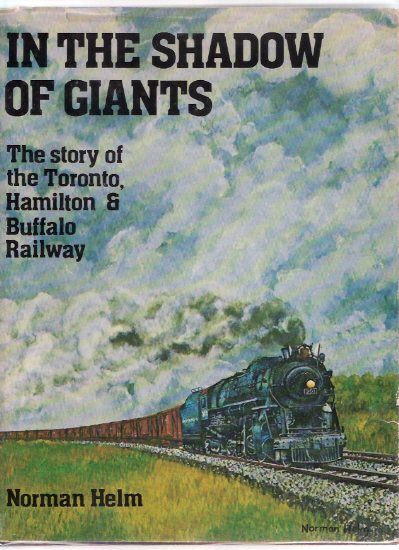 In the Shadow of Giants: The Story of the Toronto, Hamilton and Buffalo Railway -by Norman Helm ( T H & B TH&B Railway / Railroad )

-----------hardcover, quarto, a Near Fine copy in a solid Good attractive dustjacket with a bit of light wear and tear, 257 pages, packed with b&w photos, contents include: Enter the Iron Horse; For Want of a Rail ; A Railway is Born; Construction and Four New Owners; Into the Twentieth Century; Giants to be Slain; Ferries, Flappers and More Fights; Down to the Bottom, Up to the Top; Steam Power; The Modern Era; Freight Operations; Switching an Industrial Giant; Epilogue; A Portrait Gallery; Bibliography; ROSTER of ---TH&B Steam Locomotives / Diesel Units / Rolling Stock; Index , ---"The Toronto, Hamilton and Buffalo Railway was one of Canada's 'other' railways. With a main line only 104 miles long, it was a dwarf by North American standards. In foresight and progressive thinking, however, throughout its entire 102 - year history, the TH & B was a giant. The TH & B was born when railways were supreme. When the train meant escape, adventure, romance -- far away places -- excitement -- and success or failure for the businessman whose survival hung on a railway's inclination to move his goods on time. It was born at a time when industrialist and politician , farmer and factory worker depended upon the train to take them beyond the restricting confines of their home towns; a time when bowler hatted railway tycoons held gold watches against portly bellies and disdainfully damned all those who would interfere with the schedules they had set; a time when the 'railway man' was revered in his community like some knight of old with great tales of conquest to be told"---, any image directly beside this listing is the actual book and not a generic photo ///NOT SIGNED///

Title: In the Shadow of Giants: The Story of the Toronto, Hamilton and Buffalo Railway -by Norman Helm ( T H & B TH&B Railway / Railroad )

Illustrator: Cover Art By the Author

Keywords: In the Shadow of Giants: The Story of the Toronto, Hamilton and Buffalo Railway ( T.H. And B Railroad ), Golden Horseshoe, Southern Ontario, Niagara Peninsula

In the Shadow of Giants: The Story of the Toronto, Hamilton and Buffalo Railway -by Norman Helm ( T H & B TH&B Railway / Railroad )