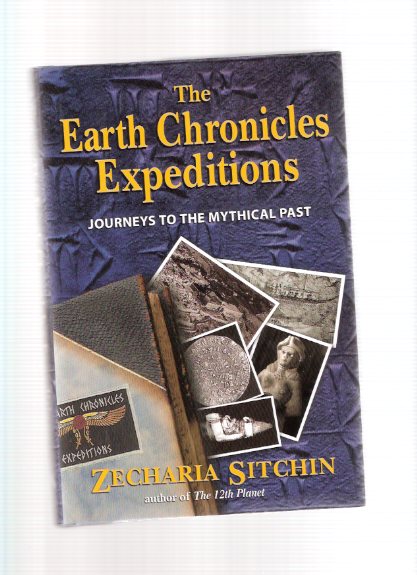 Journeys to the Mythical Past: THE EARTH CHRONICLES ---by Zecharia Sitchin

----------hardcover, a Near Fine copy in a Near Fine dustjacket, 243 pages, colour and b&w photos and illustrations, contents include: The Trojan Horse; Case of the Headless Spaceman; Atlantis without Searching; Strangers in the New World; The Elephant and the Astronaut; The Goddess who Roamed the Skies; UFO in a Buried Synagogue; Elijah's Whirlwind; How Joseph Saved Egypt; Mount Sinai Mysteries; The Elusive Mount Adventures; A Tower to Reach heaven; Tunnels for Time Travel; Enigmas of the Temple Walls; Secrets of the Sacred Rock, ---"For the first time, Zecharia Sitchin, author of the bestselling The Earth Chronicles series, reveals the foundational research and adventurous expeditions that resulted in the concrete evidence for his conclusions that ancient myths were recollections of factual events, that the gods of ancient peoples were visitors to Earth from another planet, and that we are not alone in our own solar system. In the course of his investigations Sitchin also became convinced of the veracity of the Bible. Sitchin’s expeditions take readers from the Yucatan peninsula to the isle of Crete to ancient Egypt and the lands of the Bible as he explores the links between the Old World and the New World. His adventurous exploits reveal archaeological cover-ups concerning Olmec origins in Mexico and ancient UFO artifacts in Turkey. Other quests send him through the holy sites of Jerusalem, Jordan, Syria, and Lebanon in search of evidence of extraterrestrial gods in the artifacts and murals of these ancient civilizations. The Earth Chronicles Expeditions is a masterful historical and archaeological adventure into the origins of mankind and a “must” guidebook for all who wish to visit the numerous sites and museums covered in this book. "---, any image directly beside this listing is the actual book and not a generic photo

Title: Journeys to the Mythical Past: THE EARTH CHRONICLES ---by Zecharia Sitchin

Journeys to the Mythical Past: THE EARTH CHRONICLES ---by Zecharia Sitchin