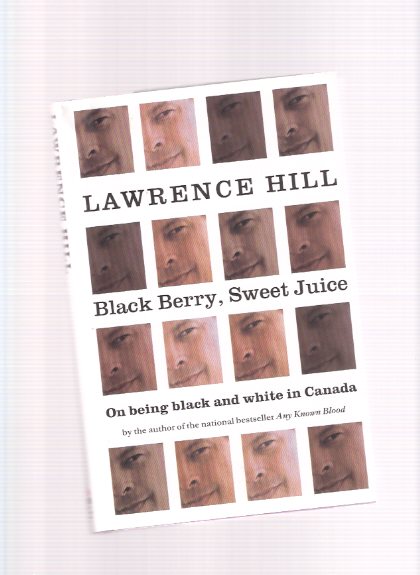 Black Berry, Sweet Juice -On Being Black and White in Canada -by Lawrence Hill ---a Signed Copy

-----------hardcover, a Near Fine copy in a Very Good+ dustjacket with a short tear at upper and lower rear flap fold, signed by Hill without inscription, ---"Lawrence Hill’ s remarkable novel, Any Known Blood, a multi-generational story about a Canadian man of mixed race, was met with critical acclaim and it marked the emergence of a powerful new voice in Canadian writing. Now Hill, himself a child of a black father and white mother, brings us Black Berry, Sweet Juice: On Being Black and White in Canada, a provocative and unprecedented look at a timely and engrossing topic. In Black Berry, Sweet Juice, Hill movingly reveals his struggle to understand his own personal and racial identity. Raised by human rights activist parents in a predominantly white Ontario suburb, he is imbued with lingering memories and offers a unique perspective. In a satirical yet serious tone, Hill describes the ambiguity involved in searching for his identity -- an especially complex and difficult journey in a country that prefers to see him as neither black nor white. Interspersed with slices of his personal experiences, fascinating family history and the experiences of thirty-six other Canadians of mixed race interviewed for this book, Black Berry, Sweet Juice also examines contemporary racial issues in Canadian society. Hill explores the terms used to describe children of mixed race, the unrelenting hostility towards mix-race couples and the real meaning of the black Canadian experience. It arrives at a critical time when, in the highly publicized and controversial case of Elijah Van de Perre, the son of a white mother and black father in British Columbia, the Supreme Court of Canada has just granted custody to Elijah’ s mother, Kimberly Van de Perre. A reflective, sensitive and often humourous book, Black Berry, Sweet Juice is a thought provoking discourse on the current status of race relations in Canada and it’ s a fascinating and important read for us all."---, any image directly beside this listing is the actual book and not a generic photo

Title: Black Berry, Sweet Juice -On Being Black and White in Canada -by Lawrence Hill ---a Signed Copy

Black Berry, Sweet Juice -On Being Black and White in Canada -by Lawrence Hill ---a Signed Copy