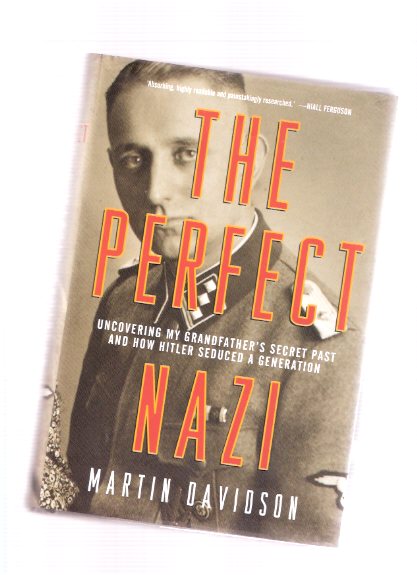 The Perfect Nazi: Uncovering My Grandfather's Secret Past and How Hitler Seduced a Generation ( Waffen - SS )

----------hardcover, a Near Fine copy, in a Very Good+ dustjacket with a crease on rear panel and rear flap, 316 pages, b&w photos, ---"A unique and highly personal history of Nazi Germany, supported throughout by documents and transcripts. In 1993 Martin Davidson discovered that his German grandfather, who seemingly spent the war as an unassuming dentist in Berlin, had been a Nazi. And a thoroughly committed one, too: he had joined the Bund as a child, graduated to the brownshirts, and signed up for the party as soon as it had become legal, seven years before Hitler came to power. Davidson became determined to discover who and what his grandfather had really been. This book is the story of that quest. It is the piecing together and fleshing out of an archetype on which the Nazi party was founded: the middle-ranking, cogwheel-oiling, in-tray-emptying, memo-writing, fanatical fascist. As Davidson trawls through the archive, discovering many revelatory documents, he comes closer and closer to a mind-reeling possibility. His grandfather had been in Hungary in 1944. Did his commitment to evil go as deep as working with Eichmann on the sending of 700,000 Hungarian Jews to Auschwitz? Davidson also investigates and considers the lives and careers of other members of his family, some of whom made very different choices. He asks, what does it mean to discover that so many of one's relatives operated on the wrong side of the greatest moral divide of modern times? And what light does that discovery shed on the inner workings not just of Nazi bureaucracy, but on the complex of emotions and calculations that drew millions of Germans to throw in their lot with an insane ideology of mass murder? "---, any image directly beside this listing is the actual book and not a generic photo

Title: The Perfect Nazi: Uncovering My Grandfather's Secret Past and How Hitler Seduced a Generation ( Waffen - SS )

The Perfect Nazi: Uncovering My Grandfather's Secret Past and How Hitler Seduced a Generation ( Waffen - SS )