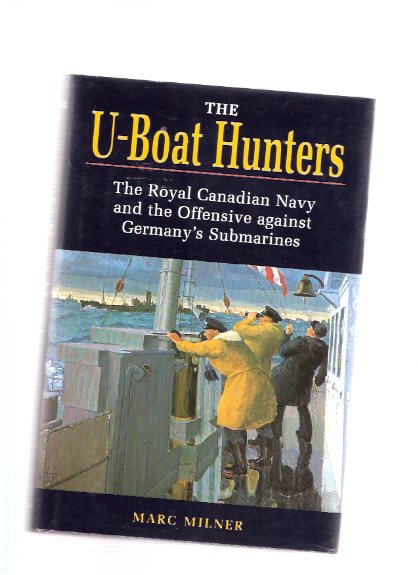 ------------hardcover, a Near Fine copy in a Near Fine dustjacket, gift inscription on first blank endpaper, 326 pages, b&w photos, ---"The RCN is best known for its role in the defence of convoys against attacks by U-boats, particularly those in the mid-Atlantic from 1941 to 1943. Marc Milner's 1985 book, North Atlantic Run: The Royal Canadian Navy and the Battle for the Convoys, was the first scholarly analysis of those crucial defensive operations. The U-Boat Hunters takes up the story for the last two years of the war, when the measurement of operational effectiveness at sea shifted from success in defending convoys to the ability to hunt down and sink U-boats.The U-Boat Hunters begins with a thorough reevaluation of the RCN's role in the decisive Allied Atlantic victory over the U-boats in 1943. It presents some startling new conclusions about why the Canadians were marginalized in this the greatest of all anti-submarine offensives. Most studies of the Atlantic war end at this point, but 1943 is just the prologue to Milner's new book. Historians have ignored anti-submarine warfare in 1944-5 because it was highly technical, undramatic and of no consequence to the outcome of the war itself. But the war against the U-boat was unrelenting. Schnorkels, improved batteries, radar detectors, and complex inshore water conditions made it difficult to find and sink late-war U-boats. By 1944 the Germans were building new, high-speed true submarines, against which the Allies had no effective countermeasures. This book is the story of how the RCN tackled these elusive enemies, how it fought to master the basics of modern anti-submarine warfare, and how its efforts fit into the larger Allied campaign"---, any image directly beside this listing is the actual book and not a generic photo