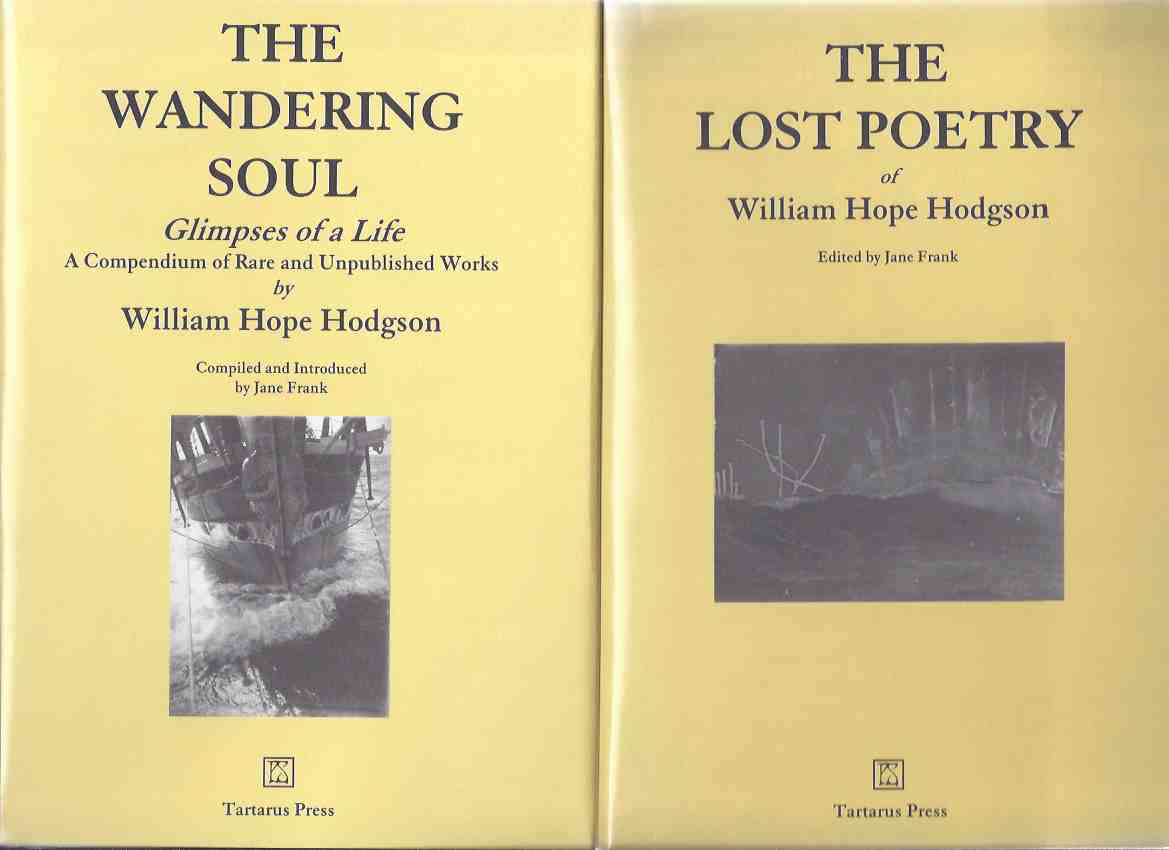 The Lost Poetry of William Hope Hodgson & The Wandering Soul: Glimpses of a Life, a Compendium of Rare & Unpublished Works ---2 Volumes in a Slipcase - Signed ( Poems )(boxed set)(Beyond the Dawning; Night Wind; After the The Calling of the Sea; etc)

By: Hodgson, William Hope, Jane Frank Editor and Compiler (signed), with a Foreword By Mike Ashley

------------2 volumes (ONE SHIPPING PRICE ), hardcover, both Very Fine in Very Fine dustjackets, housed in a Near Fine slipcase, both unread copies, Lost Poetry has been signed by Jane Frank, out of print before publication, 137 & 384 pages respectively, each with a ribbon marker, an incredible production, The Lost Poetry contains 67 poems which were largely unavailable to the Hodgson fan, includes an interesting introduction by Frank revealing biographical information about WHH that, at the best was merley touched upon by Sam Moskowitz in his Hodgson collections, ...Wandering Soul is a mind boggling work, it is profusely illustrated with b&w photos of WHH & his family, as well, there are many b&w photos which Hodgson took whilst at sea, short stories presented here as 'Coasts of Adventure' (all previously uncollected), Hodgson's 'Ship's Log' from one of his early voyages, some newly discovered poetry, factual articles from contemporary newspapers & journals, as well as an unpublished slide lecture, all augmented by the many b&w photos, contents of Soul are: Foreword By Mike Ashley; Intro By Jane Frank; References; AVENUES TO PUBLICATION: Physical Culture, a Talk with an Expert; From the Blackburn Evening Telegraph; Physical Culture Vs Recreative Exercise; Health from Scientific Exercise; LOVE OF THE SEA, ABOARD THE CANTERBURY: Ship's Log; Glossary ....STORY-TELLING THROUGH SLIDE LECTURES: A Sailor & His Camera; Through the Heart of a Cyclone; When the Sea Gets Cross; A Cyclonic Storm; Through the Vortex of a Cyclone; ... THE LIGHT THAT IS ON LAND & SEA: Portfolio of Photographs ....SPEAKING HIS MIND: a series of non-fiction essays, OUT BOATS; An Old French Woman & Her Chickens; ...SENTIMENT THROUGH VERSE: Boy Billy Boo-Hoo; Little Feet of Maggie Lee; The Heart Cry; Monsieur Les Vidoques; Tramp! Tramp!; Nevermore; The Ocean of Eternity; Sea Revelry; One Nation are We; The Conqueror; Gun Drill; Pillars of the Empire; ...PERSONAL GESTURES: The Fruit of the Tree of Life; Scraps! Scraps!! Scraps!!!; ...COASTS OF ADVENTURE: Down the Long Coasts; SOS, The Real Thing; The Regeneration of Captain Billy Keller; The Island of the Crossbones; The Inn of the Black Crow; Captain Dan Danblasten; Judge Barclay's Wife; The Friendship of Monsieur Jeynois; Jack Gray, Second Mate ....OBITUARY, a Literary Letter ...The Lost Poetry are: To God; Death; I Come Again; Ballade; Speak Well of the Dead; My Babe My Babe; Listening; Bring Out Your Dead; The World of Dreams; Madre Mia; Mors Deorum; Beyond the Dawning; If I were Dead; Over There; Night; Night & Day; The Mystery of Life; The Bridge of Melody; Passing; Shoon of the Dead; Ode to a Vase; The Thresher; The Cynic in Hell; Inspiration; Fame; The Morning Lands; The Sobbing of the Fresh Water; The Night Wind; The Death Cry of Young Genius; Thou, Who Art Jesu's Mother; Grief; Scent; Old Time Hands; Little Garments; My Son, My Son; Foot falls; Gone; How it Happened; ( Untitled ); Love; Love Song to the Dead; Lost Years; In Eternity; I Have Borne My Lord a Son; The Hunger Land; O Parent Sea; Thou Living Sea; Place of Storms; Smoke of the Blast; Rest; Wrecked; Song of the Ship; Sea of Silence; Thou & I; Storm; Conquest; Shore of Desolation; Wandering Soul; Lost; Southern Lights; Voice of One Crying in the Wilderness; Dying; After the The Calling of the Sea; Drowned; Grey Seas are Dreaming of My Death; Farewell ....this is a slipcased edition limited to 150 #ed copies, there is a trade edition of The Wandering Soul volume, the trade edition of The Lost Poetry is available individually but only in the 2nd printing, the marks and rubbing on the dustjackets appearing in the scan is from my scanner and is NOT on the dustjackets, any image directly beside this listing is the actual book and not a generic photo.

Title: The Lost Poetry of William Hope Hodgson & The Wandering Soul: Glimpses of a Life, a Compendium of Rare & Unpublished Works ---2 Volumes in a Slipcase - Signed ( Poems )(boxed set)(Beyond the Dawning; Night Wind; After the The Calling of the Sea; etc)

The Lost Poetry of William Hope Hodgson & The Wandering Soul: Glimpses of a Life, a Compendium of Rare & Unpublished Works ---2 Volumes in a Slipcase - Signed ( Poems )(boxed set)(Beyond the Dawning; Night Wind; After the The Calling of the Sea; etc)