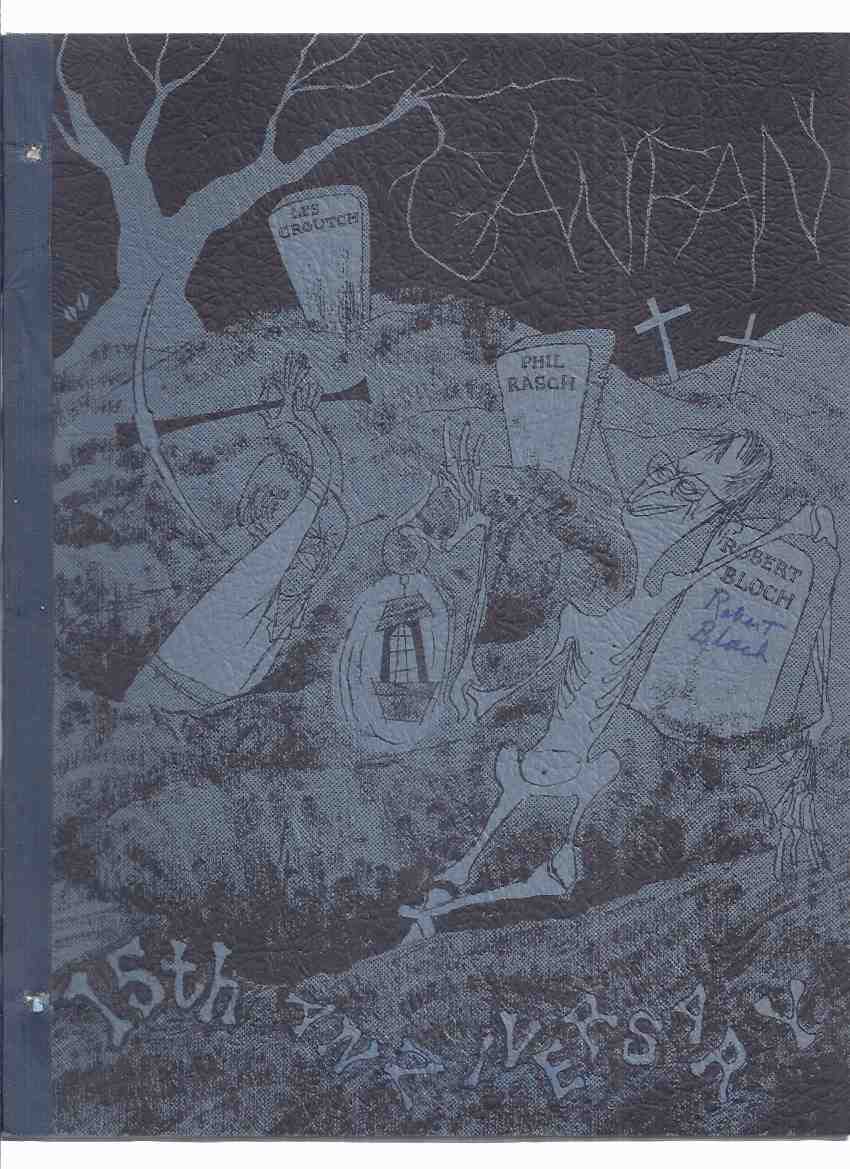 -----------fan published stapled magazine, 102 pages, Very Good+, 2 holes have been punched along the spine for storage in a binder, this is quite common with these publications (must be a Canadian thing), this contains: Fantasy & Psychology By Robert Bloch; Sidelights on the Merrittales By Phil Rasch ---Introduction: The Spell of Merritt By Arthur F Hillman: Metalanim & Matal; The Rrrllya; Ys & Carnac; The Kraken; The Face in the Abyss; Alice in Wonderland; FRITZ LANG & His Early German Films By D N Fileti; Torcon Memories By Leslie Croutch; The Missing Evening By Ned McKeown; That Old Movie Bug By William Grant; On the Edge of Unknown Power By Bill Conner; Mason in Montreal By Fred Hurter (three parts); Canadian Fandom in the Fourties (sic) ... Voyage of the Astrals By Francis T Laney; Correspondence Piece By Bob ( Wilson ) Tucker; The After Life By Oliver E Saari; The Mirror By Nils Frome; -----The really great thing about this fanzine is the front cover by Pat Patterson. It illustrates a man in a graveyard in the DEAD of NIGHT digging up the graves of Les Croutch, Phil Rasch and Robert Bloch. The really unique thing about this is that I had Robert Bloch sign his gravestone. I met Mr Bloch at a convention in London, Ontario and being the incredibly gracious man that he was, he signed the gravestone and even recognized the humour in doing so. (I'm not 100% sure but my feeling is that the figure rising out of Bloch's grave is actually a caricature of Mr Bloch). At the most, there were only 125 copies of this fanzine printed ----who knows how many survive today. I would bet that this is the only copy with a signed gravestone tho' ---a real unique item. Bloch was a contemporary of H P Lovecraft, had books and stories published by Arkham House, and is most famous for his book, Psycho, made into a classic Alfred Hitchcock movie with Anthony Perkins as the ultimate in creepiness, Norman Bates---, there is no specific contribution from Bloch in this issue , any image directly beside this listing is the actual book and not a generic photo,