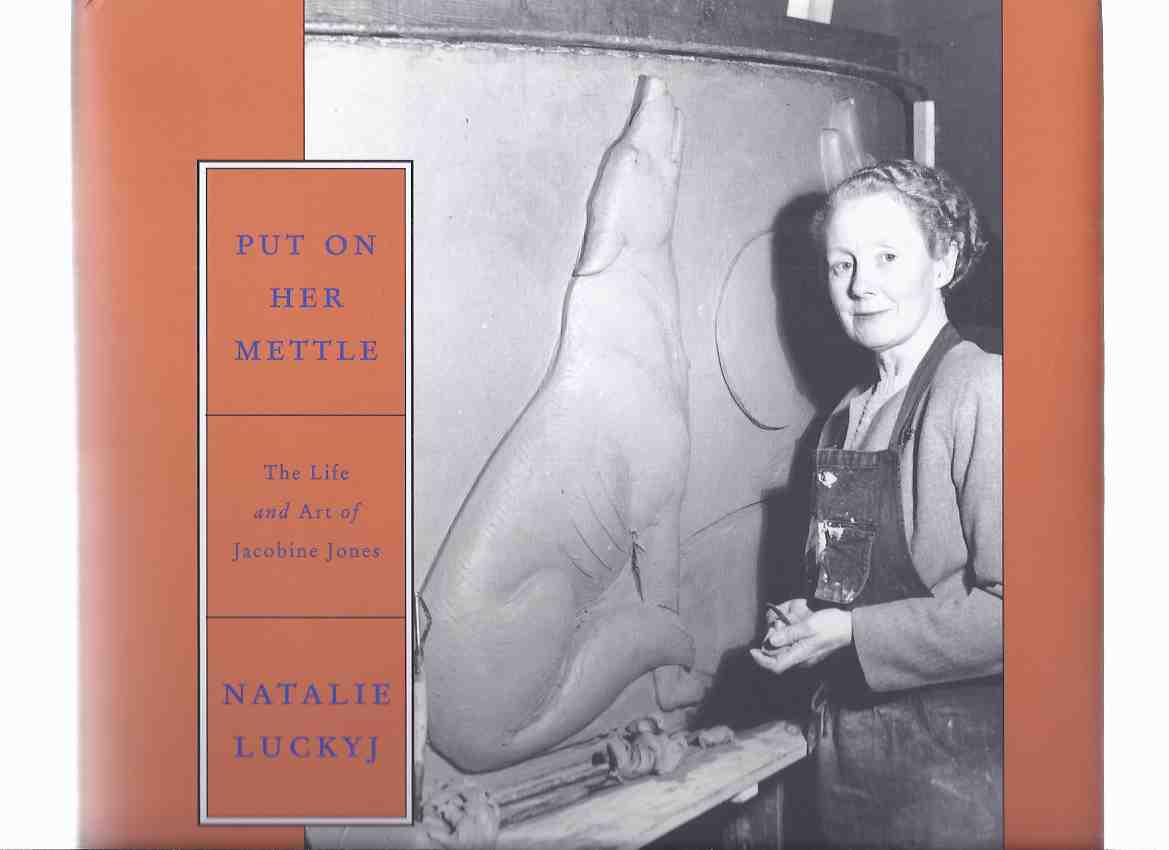 Put on Her Mettle: The Life and Art of Jacobine Jones -by Natalie Luckyj -a Signed Copy ( Sculptor / Sculpture )

------------hardcover, a Near Fine copy in a Near Fine dustjacket, signed and inscribed "For B______ -enjoy Natalie Luckyj June 25 2000", 148 pages, b&w photos, ---"SEPTEMBER 1949. At the opening of the new headquarters of the Bank of Montreal in Toronto, Jacobine Jones was among a select group of six sculptors honoured for their production of a "new type of decoration" touted to "make Canadian art history." The event marked the beginning of a new era of unparalleled opportunity for professional sculptors. Neither bohemian nor radical, Jacobine Jones, nonetheless, mapped a life that challenged proscribed gender roles. Her willingness (even need) to experience life directly led to a path of individual achievement, often beset by trial and tribulation. After disastrous financial losses in the early 1950s, Jones, like her alter-ego (and the subject of her first serious carving) Saint Joan, remained unwavering in her commitment to her vocation. Physical energy, endurance, and a fighting spirit—traits she had possessed from childhood—were essential for her survival as a practicing sculptor. In retrospect, art critic Graham McInnes' prophetic desire in 1936, "I hope that Miss Jones may be put on her mettle with greater frequency for she has something to give us," encompassed not only her artistic practice, but also her lived experience. --Born in England and trained at the Regent Street Polythechnic (London) under Harold Brownsword, Jones came to Canada in 1932 on a visit, and remained until her death in 1976. Within a year of her arrival she took on her first architectural sculptural commission for the Toronto firm of Marani, Lawson & Morris; four years later she was hard at work on a plum commission for seven figures for the facade of the new Bank of Canada in Ottawa. Armed with a classical academic training and superior technical knowledge of carving and modeling as well as direct experience of British 'vernacular modernism' of the 1920s and European sculpture, Jones was particularly well-suited to satisfy the demands for figurative sculptural art in post-war Canada."---, any image directly beside this listing is the actual book and not a generic photo

Title: Put on Her Mettle: The Life and Art of Jacobine Jones -by Natalie Luckyj -a Signed Copy ( Sculptor / Sculpture )

Keywords: Put on Her Mettle: The Life and Art of Jacobine Jones -by Natalie Luckyj -a Signed Copy

Put on Her Mettle: The Life and Art of Jacobine Jones -by Natalie Luckyj -a Signed Copy ( Sculptor / Sculpture )