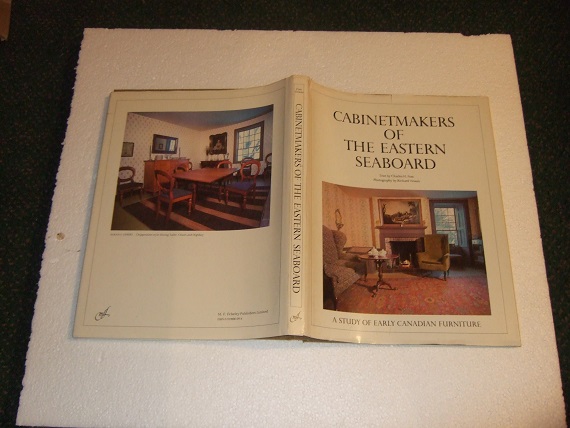 ----------large hardcover, about 10.5 x 13.5 inches, a Near Fine copy in a chipped and torn but generally intact attractive Good dustjacket,, the errata slip is present 156 pages, colour and b&w photos throughout, contents include: Introduction; The Loyalist Influence; Robert Chillas; Thomas Nisbet; Alexander Lawrence; James Hawes; Alban S Emery; The Vroom Brothers; Knox and Thompson; John Warren Moore; Thomas Jefferson Caswell; Alex. Henderson; Albert James Lordly; John D and Jonas Howe; Charles Thompson; Selective Bibliography, ---"The fine furniture tradition in Canada's eastern provinces was influenced by the arrival of the Loyalists in 1783. Among those who came were people of wealth and quality who transported, by sea, furnishings that were superior in craftsmanship and design. Accomplished cabinetmakers arriving later from Great Britain and the United States continued the tradition with their skills and developed taste; father taught son, and son preserved the craft. This book deals with twelve of the most eminent craftsmen in the area over the last two hundred years"---, any image directly beside this listing is the actual book and not a generic photo