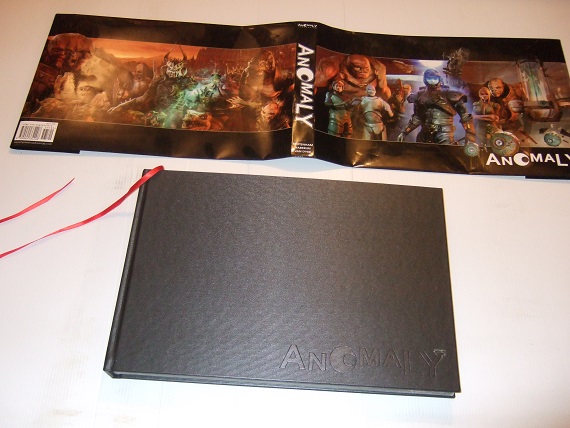 ----------hardcover, about 15w x 10h inches, a Near Fine example in a Near Fine dustjacket, looks new, ribbon marker as issued, extra shipping might be required depending upon destination -if an issue please inquire before ordering ---- 370 pages, colour images throughout, a spectacular book, ---"EARTH 2717: THE 3RD GOLDEN AGE: Building a better tomorrow today ---The planet we call home slowly dies beneath us. Most humans now live in teeming surface -Terrarium Cities,- off world colonies or orbiting space stations. All of earths resources have been depleted. All corporations, nations and technologies have merged into THE CONGLOMERATE, whose Enforcer Battalions now conquer whole planets to feed its shareholders insatiable appetites. THE CONGLOMERATE, which began with the spirit of the best mankind had to offer, saved humanity from itself by taking us to the stars and has become the most ruthless profit machine to ever exist. Never use a robot when a human will do ---Dishonorably discharged from the Conglomerates elite Enforcer Corps, Jon is doing a job too lowly for a robot. He leaps at the chance to go on a peaceful, first contact mission to an untainted world. Playing armed babysitter to Samantha, the daughter of a powerful Conglomerate executive, shouldnt be too hard. --What could go wrong? Everything ---For Jon, its a relief to get away on an easy assignment protecting a couple of do-gooders visiting a peaceful new planet. For Samantha, its a mission to change the world. For Jasson, its a chance to put his theories to the test. Being marooned on Anomaly where technology doesnt work, the terrain is lethal and the creatures even more so, Jon quickly learns hes not the man he once was. Dark secrets surround the various species that call this world home. Jons actions here have the potential to ripple across the void of space, and touch everything in it- Maybe even the Conglomera ---But when Anomaly sprouts synthetics-eating viruses, flesh-eating mutants and deadly magic, it becomes a race against which form of death will come first. Who will survive? Who will return?"---, , any image directly beside this listing is the actual book and not a generic photo ///NOT SIGNED ---GUARANTEED to be AVAILABLE///