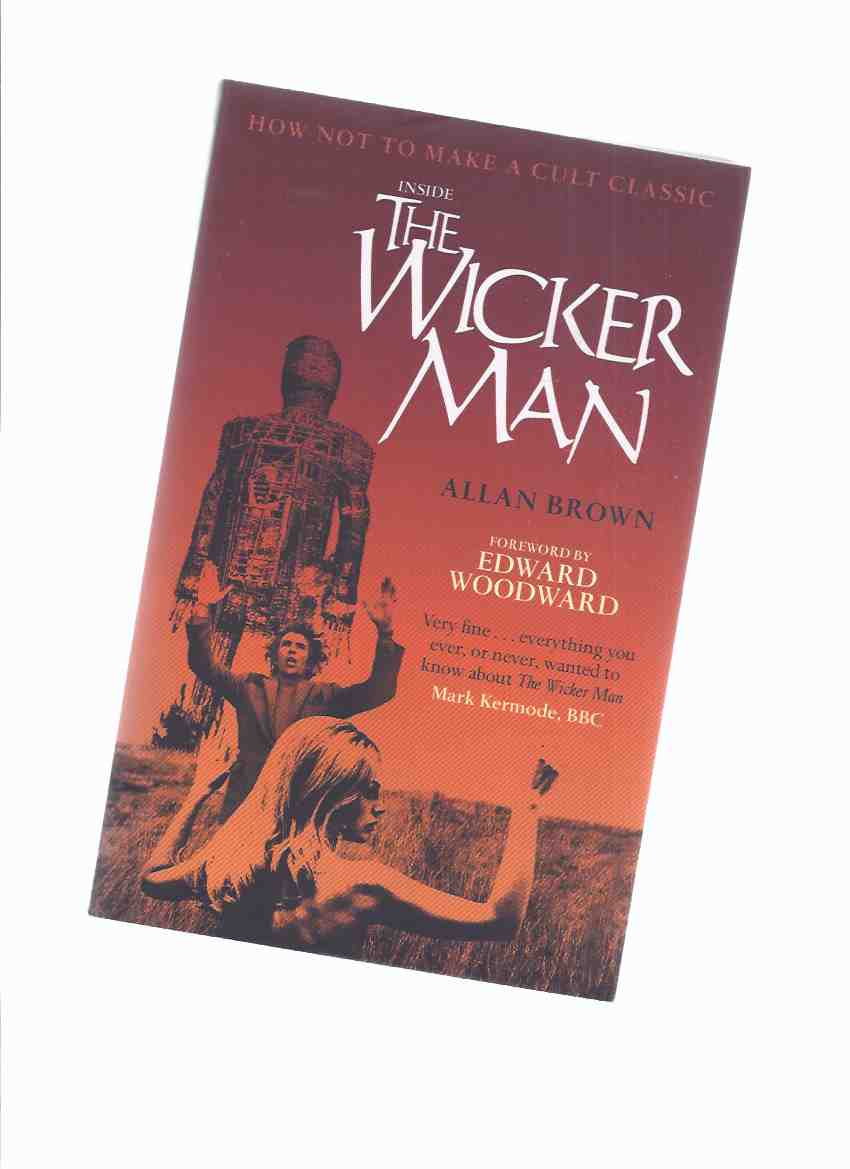 Inside The Wicker Man: How NOT to Make a Cult Classic -by Allan Brown, Foreword By Edward Woodward

------------softcover, about 5.25 x 8.5 inches, a Near Fine copy, security patch on verso of rear cover, 260 pages, b&w photos, a fascinating story about all the goings on in the making of a true cult classic, ---"Inside The Wicker Man is a treat for all cinemagoers, exhaustively researched and achieving a near-perfect balance between history, trivia and serious analysis. Allan Brown describes the filming and distribution of the cult masterpiece as a 'textbook example of How Things Should Never Be Done'. The omens were bad from the start, and proceeded to get much, much worse, with fake blossom on trees to simulate spring, actors chomping on ice-cubes to prevent their breath showing on film, and verbal and physical confrontations involving both cast and crew. The studio hated it and hardly bothered to distribute it, but today it finds favour with critics and fans alike, as a serious—if flawed—piece of cinema. Brown expertly guides readers through the film's convoluted history, attempting along the way to explain its enduring fascination, and providing interviews with the key figures—many of whom still have an axe to grind, and some of whom still harbour plans for a sequel."---from the rear cover ---The story behind The Wicker Man is one of the most notorious black comedies in cinema history. Shot in the depths of a Scottish winter, even though the film was set in spring, and with a smaller budget than the average Carry On picture, its first-time director gathered a cast of florid English character actors, a practising Australian witch, the man who taught mime to David Bowie, a Pole playing a "nymphomaniac librarian" and a Scandinavian bombshell whose voice needed to be redubbed. Tempers flared. Egos clashed. Robin Hardy, director of this "philosophical soft-core Scottish thriller musical" became a pariah, and the film's writer irritated the locals in Dumfries and Galloway by sending a letter claiming pandas and rabbits would be burned during production. ---Despite, or perhaps because of it all The Wicker Man has survived to become one of the most revered cult films ever, the intense and eerie tale of a police sergeant lured to a Hebridean island in search of a missing girl. There ensues a cat-and-mouse game between pious Sergeant Howie and charismatic Lord Summerisle, head of a secretive religious community. More relevant than ever in its analysis of the extremes to which faith can drive us, The Wicker Man highlights how permeable the barrier between civilisation and barbarity truly is. ---In this comprehensively revised edition, Allan Brown follows the film from its inception to its calamitous Hollywood remake thirty-four years later. For the first time the book features scenes from footage believed lost for ever, the never-before-seen script of Anthony Shaffer's sequel, interviews with cast and crew, and a behind-the-scenes examination of the troubles that have dogged the film from the outset., any image directly beside this listing is the actual book and not a generic photo

Title: Inside The Wicker Man: How NOT to Make a Cult Classic -by Allan Brown, Foreword By Edward Woodward

Keywords: Inside The Wicker Man: How NOT to Make a Cult Classic -by Allan Brown, Foreword By Edward Woodward, Britt Eklund

Inside The Wicker Man: How NOT to Make a Cult Classic -by Allan Brown, Foreword By Edward Woodward