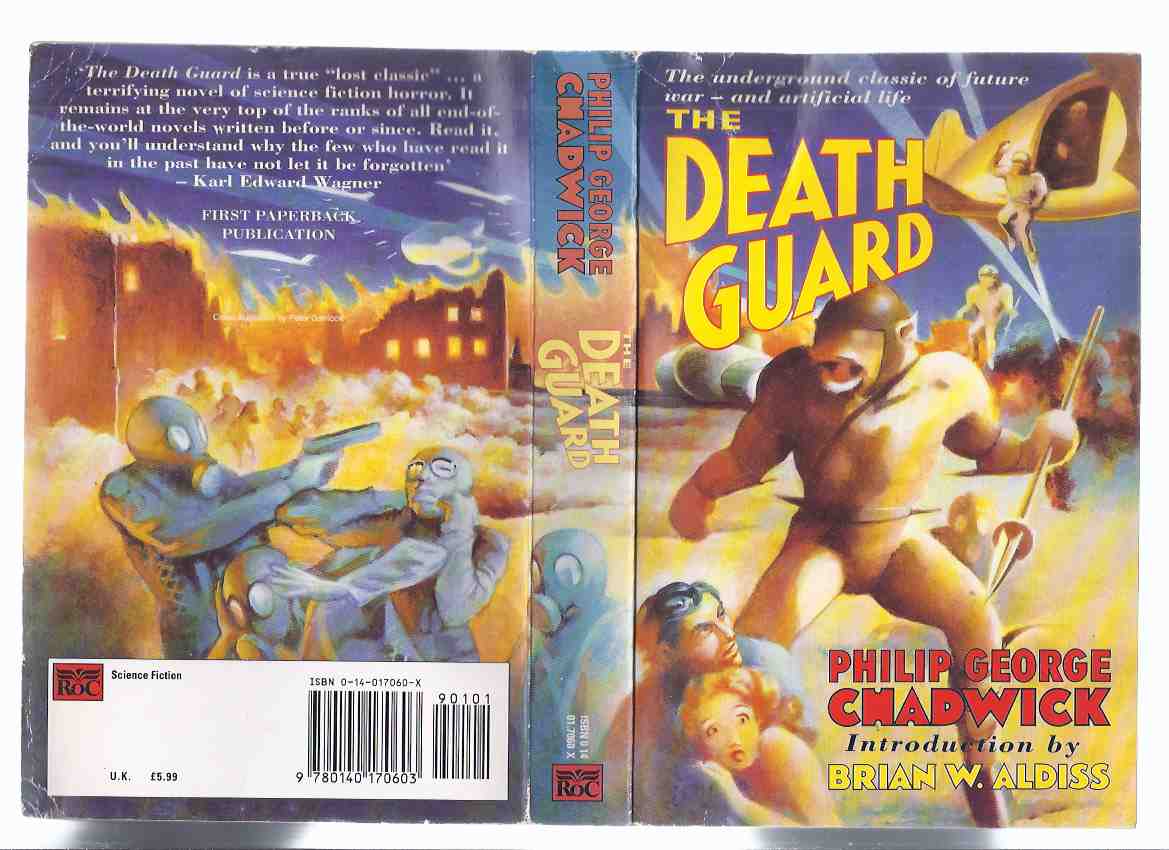 -----------softcover, about 5 x 7.75 inches, a solid Very Good copy, a bit of light rubbing, a bit of age toning and light foxing to the paper, small faint dampstain, 393 pages, ---"When a near-invincible army of artificially created soldiers - the flesh guard - falls into the hands of an untrustworthy power, continental Europe forms an alliance and invades Britain. The resulting carnage reduces whole cities and towns in Britain to smoking rubble." --- FROM WIKIPEDIA ---The Death Guard is the only published novel of the English author Philip George Chadwick (born 1893, died 1955 ). Although the author is virtually unknown to the wider public, his work has received attention from literary scholars. The novel contains many themes later developed by L Ron Hubbard and James Blish. Chadwick was a political thinker with socialist tendencies, a Fabian and subsequently an Independent and a disciple of H.G. Wells. --Legend has it that H.G. Wells used to refer to this book as one of the greatest he had ever read. It was written shortly after World War I, but by the time it was picked up for publication, World War II was already underway and allegedly, Chadwick had been killed in combat, though the 1992 paperback states that he died in 1955. To complicate matters even further, the printing house that was handling the first run of the novel was bombed in an air raid, and almost all copies were destroyed. Consequently, most science fiction fans wrote off The Death Guard as pure myth, a figment of Wells' prodigious imagination, and for years it was considered a lost novel. In 1992 it was republished, with an introduction by Brian Aldiss ---The Death Guard was cited in Karl Edward Wagner's "The Thirteen Best Science Fiction Horror Novels" and Ramsey Campbell's "Thirteen Novels on the Edge of Horror", any image directly beside this listing is the actual book and not a generic photo ///NOT SIGNED ---GUARANTEED to be AVAILABLE///

Keywords: Which One's Cliff: The Autobiography of Cliff Richard , Biography