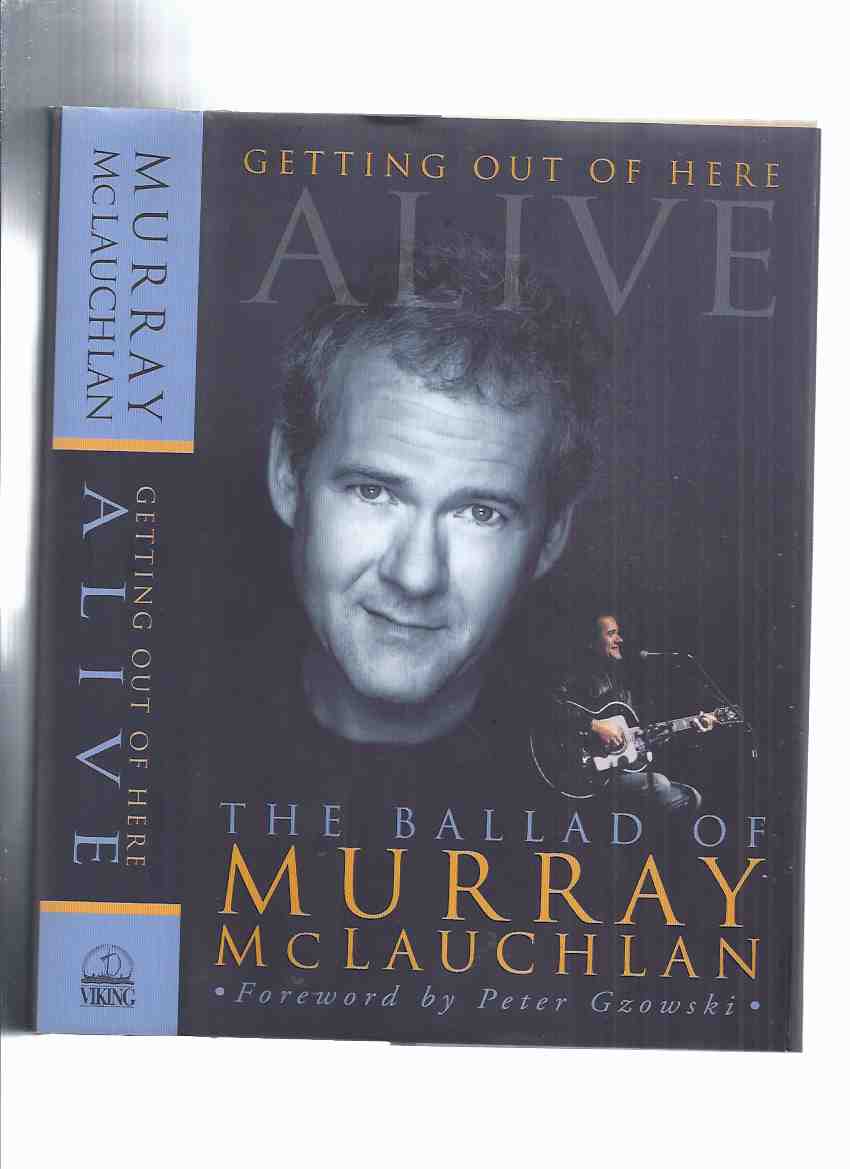 Getting Out of Here Alive: The Ballad of Murray McLauchlan ---a Signed, Inscribed Copy

-----------hardcover, a Near Fine copy but there is some foxing on the upper edge of the text block so a Very Good+ example, in a Near Fine dustjacket which is now in a hi-quality mylar protector, signed with inscription by McLauchlan on the title page "Bill, thanks for giving me a leg up when I needed it ! Love MurrayMclauchlan", --- 396 pages, CONTENTS Foreword by Peter Gzowski; ; "By the Bonny Banks of Clyde" ; Being a Little Kid ; The Samaria ; On Being a Bigger Kid; Weaning in the Fifties ; The World Expands ; Sins of the Father ; Look! Up in the Sky! ; Meeting Robert Bateman; The Hysterical Boatman; Childhood's End; Art School Years; The Boy Snaps Awake; The Move to Manhood; Leaving Home; Riding the Rails; Yes, I'm Moving; Sometimes the Bear Eats You ; Spinning Wheels Grab the Road; Trying to Get Going; Why, Because You Have to?; Yorkville; The Commune; Ghost Story; New York City; The Ship Isn't in, but You Can See the Land; Goin' Back to New York City; Farmer's Song and Beyond; Massey Hall Debut; Goodbye to You Too, Pa; Bars, Boats and Limousines; A Very Good Year ; Crash and Burn; The Comeback Kid; Life Gets Really Complicated; You Thought That Was Complicated; The Beautiful Girl Child; A Smoking Hole Where I Used to Be; Love's Bubble Springs a Leak; Floating Over Canada; Floating, Part II ; What Else Can You Show Me? ; Goodbye, Mama ; Picking Up the Pieces; Swinging on a Star to Swinging on a Star; And Then Came Duncan; Epilogue; Discography; Index, ---from the front flap: Anyone who has attended Murray McLauchlan's concerts or heard him on radio or television knows what a great storyteller he is. His songs themselves often tell stories, evoking a time and place so palpably that we are suddenly there with him, experiencing the sorrow mixed with elation of a young man leaving home, or the love of the land and an understanding of the people who work it. Murray McLauchlan rose to prominence as a song-writer in 1968 with "Child's Song," and in the three decades since he has delighted concertgoers and produced a steady stream of albums. He was there at the dawn of a distinctly Canadian sound singing with Joni Mitchell at Mariposa and touring with Bruce Cockburn in Japan and wrote some of the best-loved and most enduring songs of that era. His music continues to define the Canadian folk sound. As he approached fifty, Murray McLauchlan began to write down his life story, to try and get at what really mattered and why it mattered. Fascinated by the idea of "disappearing" on the other side of the meridian of life, he went full circle and returned to the working-class town of Paisley in Scotland, to the very room in which he'd been born. During that same trip, he visited the ruined McLauchlan castle and the battlefields at Culloden, finding his own place within a long and tumultuous clan history. Before Murray turned five, his family emigrated to Canada, where he grew up in Toronto in the fifties. It was there, during high school, that he discovered his love of painting, encouraged by his teacher, watercolourist Doris McCarthy. Leaving home at seventeen, he travelled to Vancouver, riding the rails and hitch-hiking his way across the country, singing for his supper wherever he could find an audience. He describes many journeys since, and many passions: his love of flying, for example, which eventually led him to circumnavigate the country in a Cessna 185 floatplane, creating the 1986 television special "Floating Over Canada." In this memoir of his first fifty years, Murray McLauchlan writes with astonishing honesty and passion. It is as if he is speaking to an old friend, or perhaps his grown son or daughter, telling the story of his life as they sip single malt and listen to the storm outside the window. Often hilarious, some-times deeply moving, this is an intimate self-portrait by one of Canada's best-loved singer-songwriters. MURRAY MCLAUCHLAN has made eighteen albums, garnering no fewer than eleven Juno awards. A radio and television personality, he hosted "Swinging on a Star" on CBC Radio (1989-1994) and is currently the host of a new talk show on Prime TV. In 1993, Murray McLauchlan received the Order of Canada. , any image directly beside this listing is the actual book and not a generic photo

Title: Getting Out of Here Alive: The Ballad of Murray McLauchlan ---a Signed, Inscribed Copy

Getting Out of Here Alive: The Ballad of Murray McLauchlan ---a Signed, Inscribed Copy