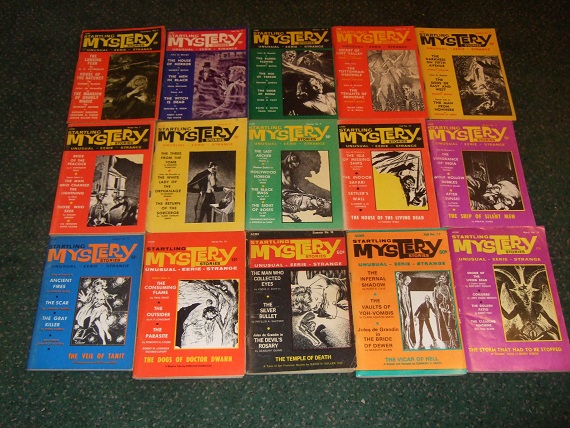 ---------15 volumes (ONE SHIPPING PRICE ), overseas shipping (outside of Canada and the USA ) will require additional postage, all are about Very Good copies with a #8 being Good as it has tears along the spine, some age toning and browning to the paper, some issues have some light wear and rubbing, some cover creases and short tears but overall a solid clean near complete set ---VOLUME 1 contains: Village of the Dead by Edward D Hoch; House of the Hatchet by Robert Bloch; The Off Season by Gerald W Page; The Tell Tale Heart by Poe; The Lurking Fear by H P Lovecraft; The Awful Injustice by S B H Hurst; Ferguson's Capsules by Derleth; The Mansion of Unholy magic by Quinn ---VOLUME 2 contains: House of Horror by Quinn; The Men in Black by John Brunner; The Strange Case of Pascal by Hoch; Doctor Satan by Paul Ernst; Secret of the City by Terry Carr & Ted White; The Street by Lowndes; Scourge of the B'Moth by Bertram Russell ---VOLUME 3 contains: The Inn of Terror by Gaston Leroux; The Other by Lowndes; The Door of Doom by Hugh B Cave; A Matter of Bleeding by Ralph E Hayes; Esmerelda by Roma Wells; The Trial for Murder by Charles Collins & Charles Dickens; The Blood Flower by Quinn ---VOLUME 4 contains: The Tottenham Werewolf by August Derleth; The Secret of Lost valley by Robert E Howard; Medium for Justice by Victor Rousseau; Si Urag of the Tail by Oscar Cook; The Temptation of Harringay by H G wells; The Tenants of Broussac, a Jules de Grandin story by Seabury Quinn ---VOLUME 5 contains: Gods of East & West by Quinn; The Council & The House by Lowndes; Behind the Curtain by Leslie Jones; A Game of Chess by Robert Barr; The man from Nowhere by Hoch; Darkness on Fifth Avenue by Leinster ---VOLUME 7 contains: Bride of the Peacock by E Hoffman Price Nice Old House by Dona Tolson; Those Who Seek by Derleth; John bartine's Watch by Ambrose Bierce; The Pet of Mrs Lilith by Tobert Barbour Johnson; The Man Who Changed the Lightning by paul Ernst; ---VOLUME 8 contains: The White Lady of the Orphanage by Quinn; The Gray People by John Campbell Haywood; And Then No More by Jay Tyler; The Endocrine Monster by R Anthony; The Return of the Sorcerer by Clark Ashton Smith; The Three from the Tomb by Edmond Hamilton ---VOLUME 9 contains: The Black Mass by Colonel S P Meek; The Last Archer by Earl Pierce Jr.; The Sight of Roses by Jay Tyler; Acrophobia (verse) by L Sprague de Camp; Webbed hands by Ferdinand Berthoud; Hollywood Horror -a Dr Satan novelet by Paul Ernst ---VOLUME 10 contains: The House of the Living Dead by harold Ward; The Indoor Safari by Max Nugor; The House Party at Smoky Island by L M Montgomery; Settler's Wall by Lowndes; The Isle of Missing Ships, a Jules De Grandin Story by Seabury Quinn ---VOLUME 11 contains: Wolf Hollow Bubbles by David H Keller; Mrs Kaye by beverly Haaf; The Haunter of the Ring by Robert E Howard; The Vengeance of India, a Jules de Grandin story by Seabury Quinn; After Sunset by Philip Philip Hazleton; The Ship of Silent Men by Philip M Fisher; The Whisperer (verse) by Lowndes ---VOLUME 13 contains: The Gray Killer by Everil Worrell; The Scar by J Ramsey Campbell; Where ther's Smoke by Donna Gould Welk; Ancient Fires, a Jules de Grandin story by Seabury Quinn; The Cases of Jules de Grandin, a Chronoligical listing of the the first 50 stories by Lowndes (includes some b&w Weird Tales covers); The hansom Cab by Ken Porter ---VOLUME 14 contains: The Dogs of Doctor Dwann by Edmond Hamilton; The Parasite by Dorothy Norman Cooke; The Outsider by H P Lovecraft; The Crawler (verse) by Lowndes; The White Domino by Urann Thayer; The case of the Dr Who Had no Business by Richard Lupoff; The Feline Phantom by Gilbert Draper; The Consuming Flame, a Dr Satan story by Paul Ernst --- VOLUME 16 contains: The Smell by Flagg; The Temple of Death by David keller; The Silver Bullet by Phyllis Whitney; The Man Who Collected Eyes by Eddy C Bertin; The Devil's Rosary by Quinn ---VOLUME 17 contains: The Infernal Shadow by Hugh B Cave; The Vaults of Yoh-Vombis by Clark Ashton Smith; Laura by Joseph H Bloom; The Vicar of Hell, a Simon Ark story by Edward D Hoch; The Bride of Dewer, Jules de Grandin story by Seabury Quinn ---VOLUME 18 contains: Drome of the Living Dead by John Scott Douglas; The Editor's Page - On Nero Wolfe; Conjured by Larry Eugene Meredith; The Golden Patio by Aubrey Feist; The Cleaning Machine by F Paul Wilson; The Storm That Had to be Stopped by Murray Leinster (aka Will Jenkins ), it would be hard to imagine a nicer set, any image directly beside this listing is the actual book and not a generic photo ///NOT SIGNED ---GUARANTEED to be AVAILABLE///

Illustrator: Virgil Finlay and Others