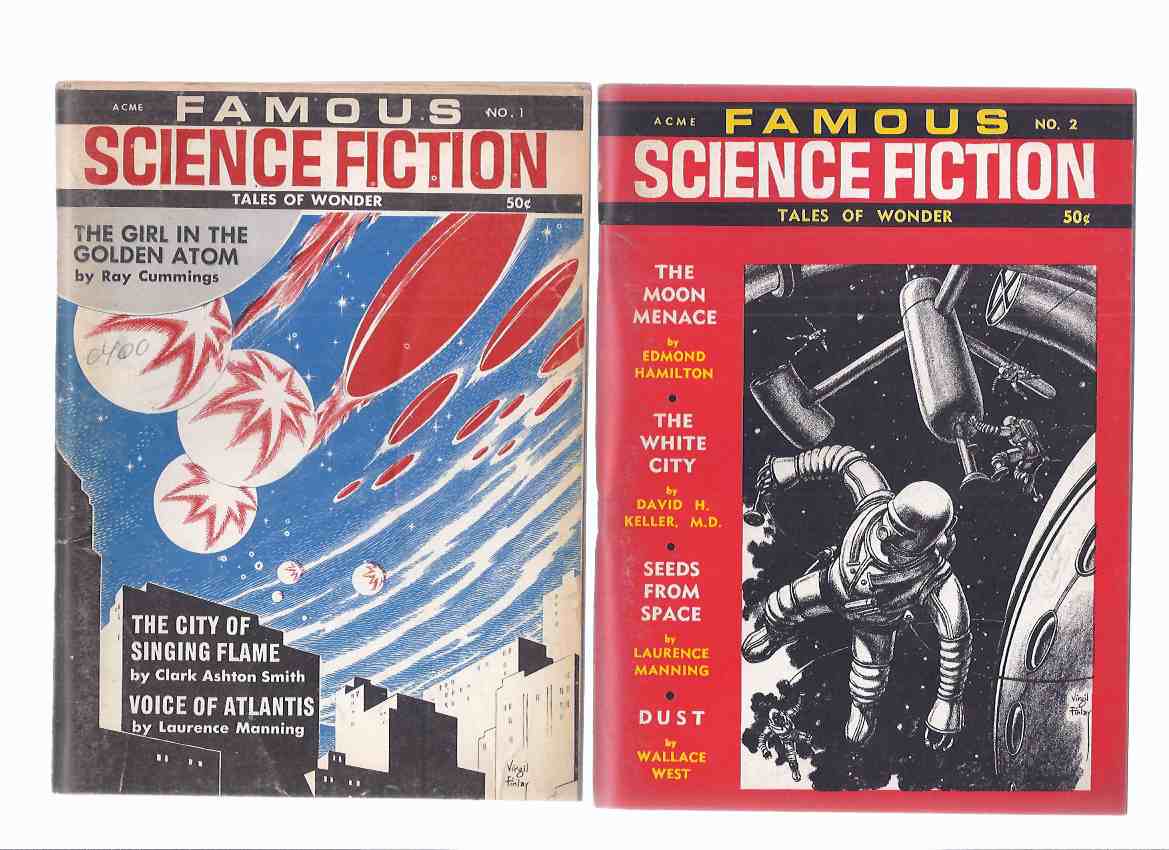 -----------8 volumes (ONE SHIPPING PRICE ), digest size softcovers, all are solid Good to Very Good copies. some light wear and rubbing, some small ink numbers of front covers, some browning to paper as usual, some shallow chips and short tears, contents include: # 1: The Girl in the Golden Atom by Ray Cummings; Voice of Atlantis by Laurence manning; The City of Singing Flame by CAS; The Plague by George H Smith; The Question by J Hunter Holly ---#2 The Moon Menace by Edmond Hamilton; The White City by David H Keller; Seeds of Space by Laurence Manning; Dust by Wallace West; Rimghost by A Bertram Chandler ---#3: Beyond the Singing Flame by CAS; The Last American by J A Mitchell; The man Who Awoke by Manning (story 1 ); A Single Rose by Jon DeCles; Disowned by Victor Endersby ---# 4: The Man Who Awoke by Manning (story 2 ); The Last Shrine by Chester D Cuthbert; The City of Spiders by H Warner Munn; Do Not Fold or Mutilate by William M Danner; The Times We Had by Edward D Hoch; Master of the Octopus by Edward Olin Weeks (intro by Sam Moskowitz ) ---#6: The Hell Planet by Leslie F Stone; The Individualists by Manning (story 4); The Invulnerable Scourge by John Scott Campbell; More Than One Way by Burt K Filer; The Dragon-Kings by L Sprague de Camp --- # 7: Men of the Dark Comet by Festus Pragnell; The Elixir by Manning (story 5 ); Away from the Daily Grind by Gerald W page; The Fires Die Down by Robert Silverberg; Not By Its Cover by Philip K Dick #8 = Dark Moon by Charles Willard Diffin; The Eld by Miriam Allen deFord; Eternal Man by D D Sharp; Maiden's Sacrifice by Edward D Hoch; Why the Heavens Fell by Epaminondas T Snooks (penname for C. P. Mason ); Art or Artiness by Lester del Rey; First fandom by Bob Madle, --- # 9: The Forgotten Planet by Sewell peaslee Wright; A Glance Ahead by John Kendrick Bangs; Space Storm by Harl Vincent; Death from the Stars by A Rowley Hilliard; John Kendrick Bangs - Forgotten master by Richard Lupoff; The Borders of SF by Lowndes; First fandom by Robert Madle, any image directly beside this listing is the actual book and not a generic photo ///NOT SIGNED---GUARANTEED to be AVAILABLE///