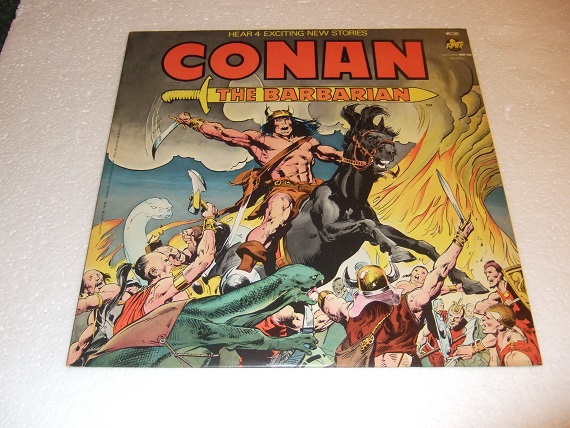 -----------33 1/3 record album, a Near Fine record sleeve with a Near Fine album,, a bit of browning to on the rear cover along the open edge, four stories are presented, nice period Marvel artwork on front and rear panels of the record sleeve, scarce, artist is uncredited but this looks like either John Buscema or Neal Adams or both collaborating as they were part of the Marvel stable of artists at that time, ---PLEASE NOTE: The record looks very clean and tidy with no apparent scratches but there could be some slight surface noise and tics just because of the age of this but overall the record looks prettyd arn close to new, any image directly beside this listing is the actual book and not a generic photo ///NOT SIGNED///

Title: Conan the Barbarian - 33 1/3 Record Album with 4 Stories - The Jewel of the Ages / Shadow of the Stolen City / The Thunder Dust / The Crawler in the Mists / Marvel Comics ( LP )