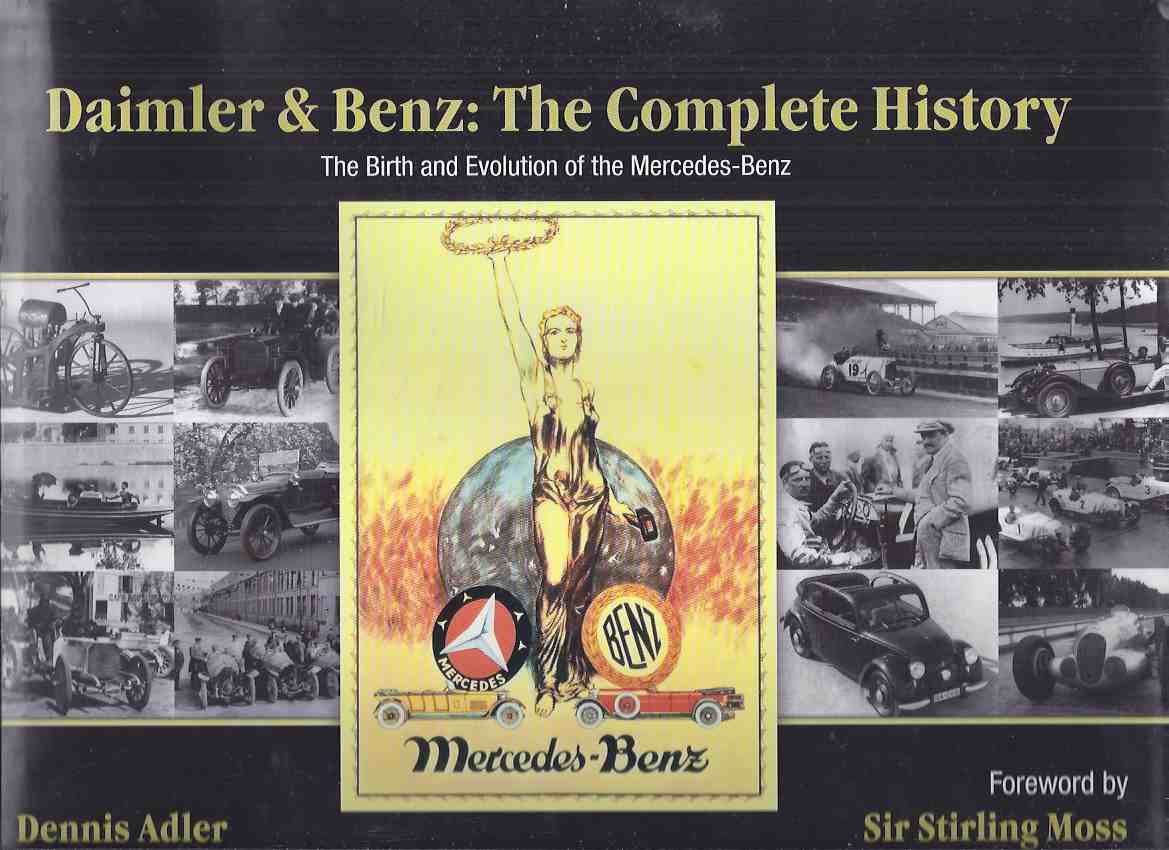 Daimler and Benz: The Complete History -The Birth and Evolution of the Mercedes Benz ( Cars / Automobile / Automotive history)

----------hardcover, about 12w x 9.25h inches, a Near Fine copy in a Near Fine dustjacket, 277 pages, loaded with colour photos and advertisement reproductions, some b&w, ---"From the earliest workshop days to the grandest marque in the automotive world, the story of one of the most important enterprises of the twentieth century comes alive in this complete history. --The rich history of Daimler-Benz (now DaimlerChrysler) has its roots in the early experimentation with the use of the internal combustion engine by three men: Carl Benz, Gottlieb Daimler, and William Maybach. Benz, working alone, and Daimler and Maybach, working together, the two shops separated by a mere sixty miles, in the late 1880s simultaneously laid the foundation of what would become the German automotive industry. --At first there was competition between Benz & Cie. and Daimler Motoren Gesellschaft, as they engineered and styled the earliest motorwagens and began to develop markets for their products. These early efforts led to the establishment of an entire industry by the start of World War I. --But the war and its aftermath devastated these two companies, as it did the German economy overall. By the early 1920s it became apparent that the only way to survival was a merger, and thus, on June 29, 1926, the stockholders of both companies gave approval to the new company, Daimler-Benz, which led directly to the birth of one of the world's best-known brands: Mercedes-Benz. --In the hands of noted automotive photographer, author, and editor Dennis Adler, the history of the marque and the company unfolds through the decades, as Mercedes-Benz advances in fame, from the racing glory years to the present, becoming the standard that all automakers strive to meet. With archival (many never before published) and the author's own photographs, the beauty and power of the automobile comes alive, from the earliest models to the first crop of twenty-first-century Mercedes-Benzes. It is a story of excellence that is in many ways unmatched in the history of any industry. Today, as a global leader in design, safety, and overall excellence, Mercedes-Benz continues to lead the way. "---, any image directly beside this listing is the actual book and not a generic photo..///NOT SIGNED ---GUARANTEED to be AVAILABLE///

Title: Daimler and Benz: The Complete History -The Birth and Evolution of the Mercedes Benz ( Cars / Automobile / Automotive history)

Keywords: Daimler and Benz: The Complete History -The Birth and Evolution of the Mercedes Benz ( Cars / Automobile / Automotive history)

Daimler and Benz: The Complete History -The Birth and Evolution of the Mercedes Benz ( Cars / Automobile / Automotive history)