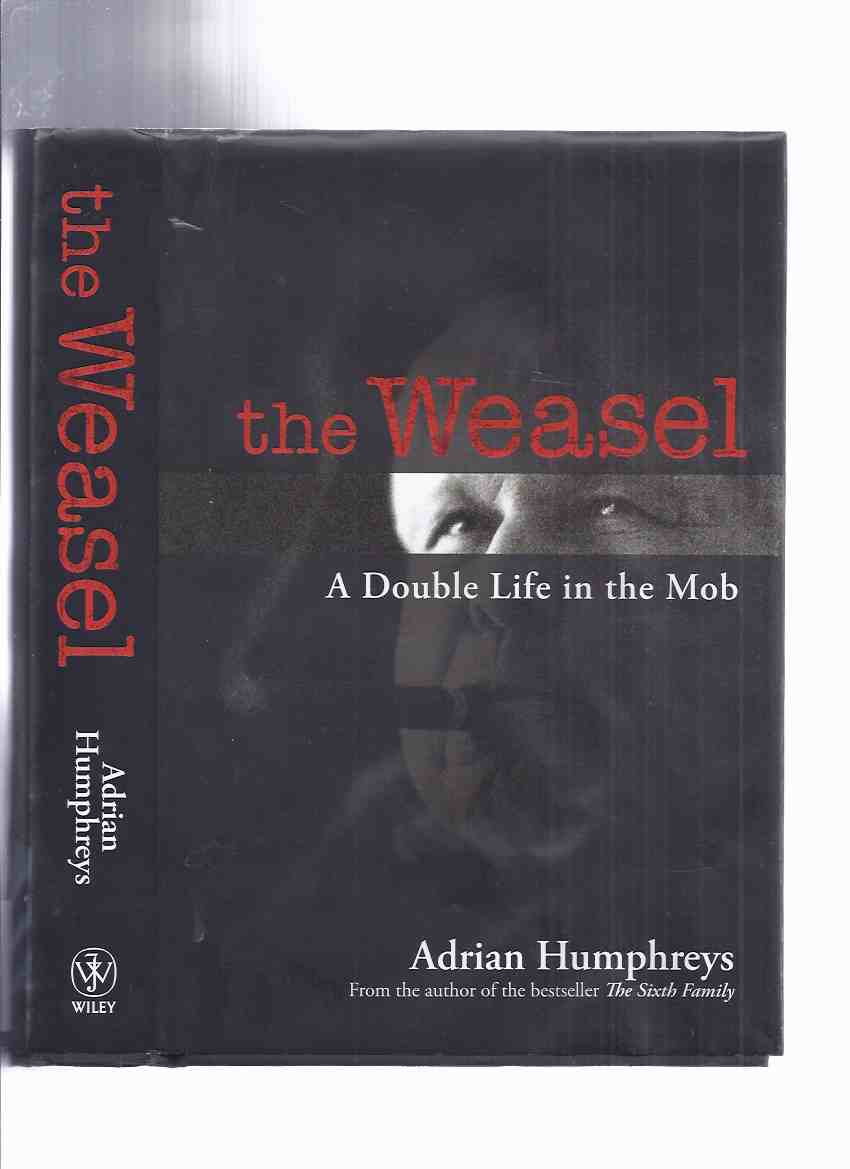 The WEASEL: A Double Life in the Mob ---by Adrian Humphreys (story of Marvin Elkind [signed], Mobster - Informer - and Chauffeur to Jimmy Hoffa )

By: Humphreys, Adrian; ( Signed By Marvin Elkind, the Weasel )

------------hardcover, a solid Very Good copy, gift inscription on front blank endpaper, the front endpaper and half title page is wrinkled from moisture, no dampstain but there is some wrinkling, in a Very Good dustjacket with a bit of wrinkling to the front panel, overall this looks quite nice especially with the jacket in a hi-quality mylar protector, 406 pages, colour and b&w photos, signed and inscribed "To C_____ T______ From Marvin the Weasel Elkind Marvin Elkind", ---copies signed by Elkind are scarce, ---"In the world of organized crime the bosses grab the headlines, as the names Capone, Gotti, Bonnano, Cotroni and Rizzuto attest. But a crime family has many working parts and the young mobster known as The Weasel was the epitome of a crucial, invisible cog-the soldier, the muscle, the driver, the gopher. By a quirk of fate, Marvin Elkind-later The Weasel-was placed in the foster home of a tough gangster family, immersing him from the age of nine in a daring world of con men, cheats, bootleggers, loan sharks, bank robbers, leg breakers and Mafia bosses. During a Golden Age of underworld life in New York, Detroit and across Canada, The Weasel found himself working with a surprising cast of colourful characters. He befriended powerful gangsters by smuggling bottles of Scotch to their tables as a waiter at New York's famed Copacabana; he was pushed to be Jimmy Hoffa's chauffeur. But his disenchantment with the broken promises of mob life brought him into another fraternity, one offering the same adrenaline rush, danger and dark comedy he craved. After a startling confrontation, he was embraced by law enforcement, and a cop with a reputation for results. Now a career informant, The Weasel learned he was a far better fink than he ever was a crook. With his impeccable gangland pedigree, enormous girth, cold stare and sausage-like fingers adorned with chunky rings, no one questioned The Weasel's loyalty. The backroom doors were flung open and The Weasel slipped in, bringing undercover cops with him. For case after case over two decades, he worked for the FBI, U.S. Customs, Scotland Yard, RCMP, Ontario Provincial Police and other law enforcement agencies on three continents, trapping and betraying mobsters, mercenaries, spies, drug traffickers, pornographers, union fat cats and corrupt politicians. With unflinching honesty, The Weasel and many of the undercover officers he worked with revealed their successes and failures to award-winning crime reporter and best-selling author Adrian Humphreys. The Weasel is the riveting chronicle of a unique and engaging figure who lived a most dangerous and rare experience. It is a story that was never supposed to be told."---, any image directly beside this listing is the actual book and not a generic photo ///SIGNED///

Title: The WEASEL: A Double Life in the Mob ---by Adrian Humphreys (story of Marvin Elkind [signed], Mobster - Informer - and Chauffeur to Jimmy Hoffa )

Keywords: The WEASEL: A Double Life in the Mob ---by Adrian Humphreys (story of Marvin Elkind [signed], Mobster - Informer - and Chauffeur to Jimmy Hoffa )

The WEASEL: A Double Life in the Mob ---by Adrian Humphreys (story of Marvin Elkind [signed], Mobster - Informer - and Chauffeur to Jimmy Hoffa )