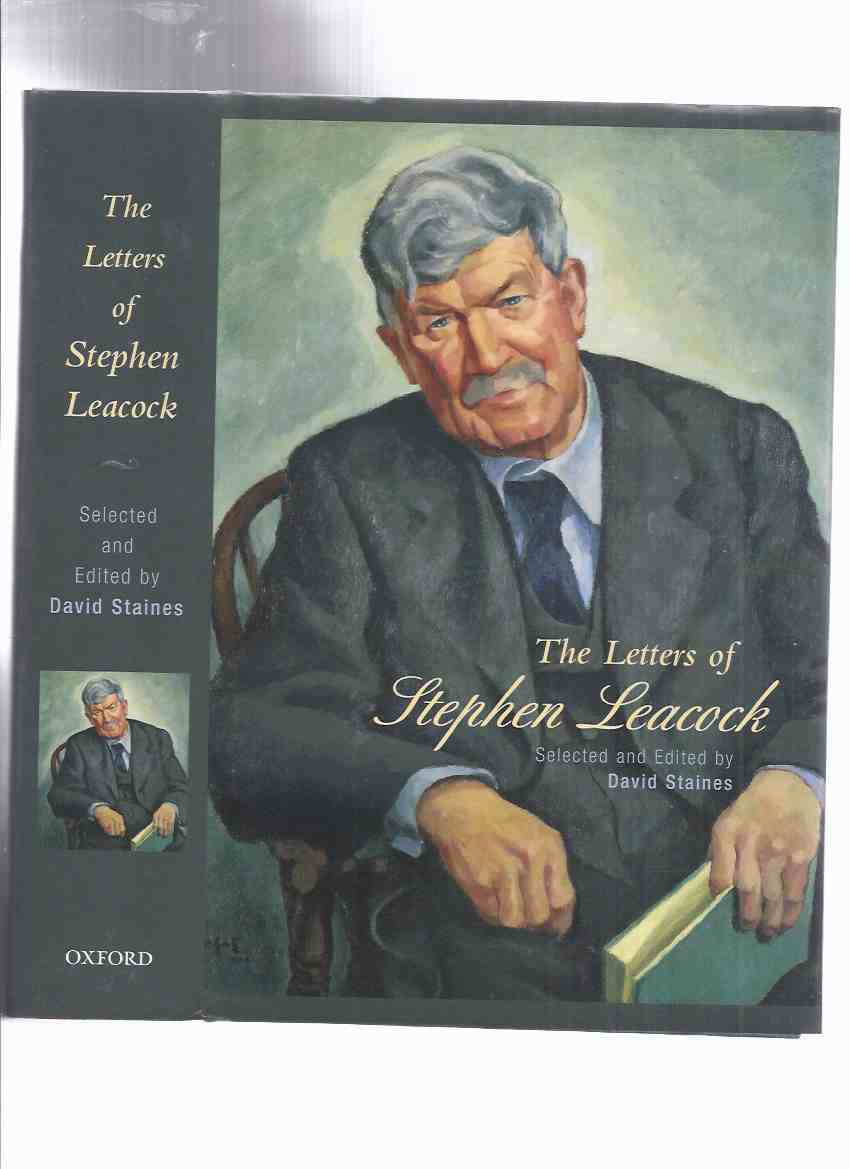 By: Leacock, Stephen; Selected and Edited By David Staines with Barbara Nimmo (cover Art By Edwin Holgate )(includes a Memoir By Agnes Leacock )

-------------hardcover, about 6w x 9.25h inches, a Near Fine / Fine example, gift inscription on front blank endpaper, in a Near Fine / Fine dustjacket, 564 pages, b&w photos, ---"Widely recognized as Canada's finest literary humorist, Stephen Leacock was a prolific author, publishing over sixty books during his lifetime, in addition to countless articles and pamphlets. He was also a devoted correspondent, writing hundreds of letters to friends, relatives, and business associates. Illustrated with several original photographs, The Letters of Stephen Leacock brings together over 800 letters, most of them never before published. Together they give a vivid picture of one of the twentieth century's most distinguished men of letters, a man who was honest, compassionate, and committed to his craft. From the brief, unpolished lines he wrote as a boy to his father, to the final letters he wrote before his death, Leacock's correspondence reveals much about the man behind the humour: the devoted son, husband, and father; the distinguished McGill professor; the proud Canadian; the generous uncle; the social critic; and the private citizen consumed and deeply troubled by the two world wars. Fans of Leacock's many books of humour will find glimpses of his trademark wit in letters on subjects ranging from the Scottish penchant for whiskey to the beauty of the west. serious works on many topics, including political economy, education, and social reform, and many of his strong views on these subjects are laid out plainly in letters to associates and friends. He was also an astute businessman, and was, as letters to numerous publishers show, a writer by profession. As Leacock himself wrote of his letters to a friend and associate, 'We wrote in the plain straighforward way only possible in such an interchange of letters, about what we thought of this new world that seemed to overwhelm us in our old age.' These are the letters of a gentleman, written with charm, grace, and humour, occassionally blunt and assertive in dealings with publishers, but - in keeping with his humour - never mean-spirited or designed to injure. Together, they represent a fascinating collection that will captivate anyone who enjoys Canadian fiction or history. David Staines has spent 15 years bringing together Leacock's letters, many of them from private collections in Britain, the United States, and Canada. letters in the context of Leacock's life and work."---, any image directly beside this listing is the actual book and not a generic photo ///NOT SIGNED ---GUARANTEED to be AVAILABLE///