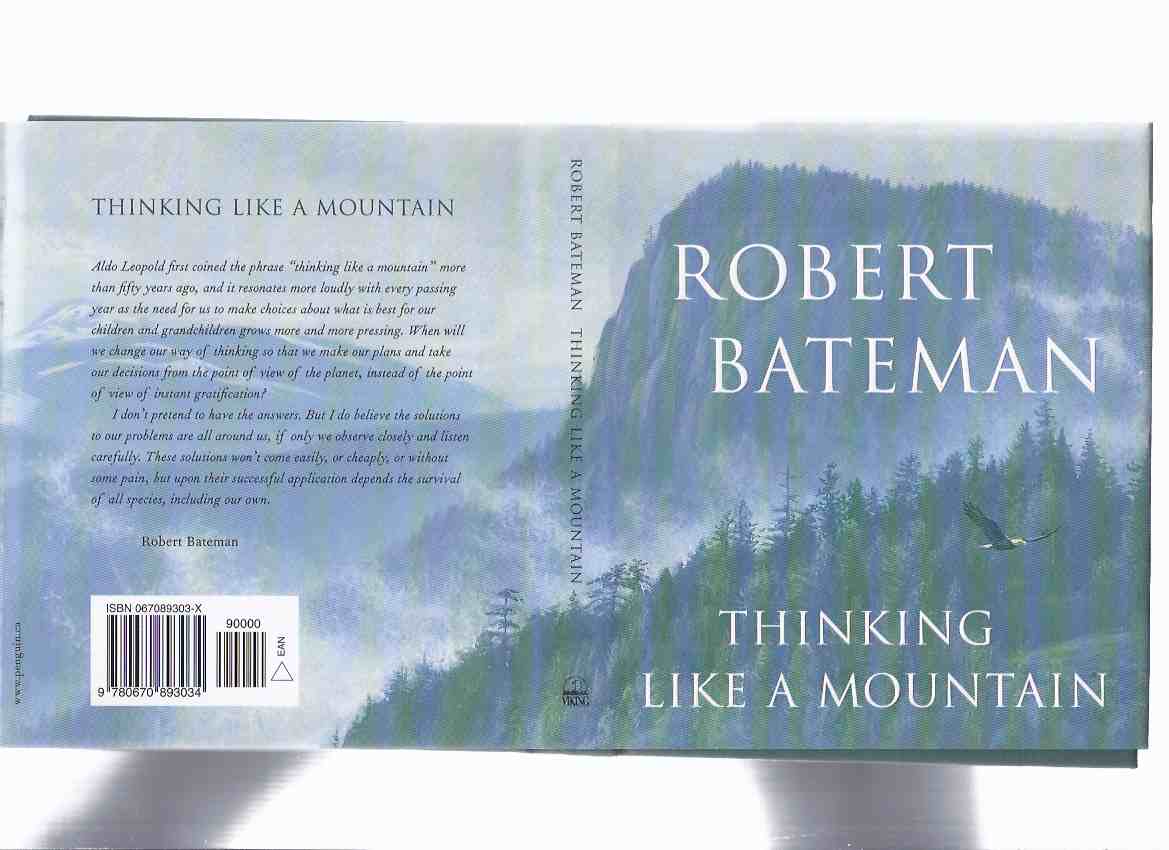 Thinking Like a Mountain -by Robert Bateman -a Signed Copy

----------hardcover, a Near Fine copy, in a Near Fine dustjacket with some light rubbing, signed "To Tim Best wishes Robert Bateman 2000", 130 pages, b&w illustrations, ---"Nature has been Robert Bateman's inspiration ever since he began painting birds from his bedroom window as a young boy. The wildlife he features in his paintings are expressions of his love and respect for the natural world. --A passionate environmentalist who has devoted his life to documenting the awesome power of nature, Bateman is deeply worried about the state of our planet and the fate of our natural heritage. Whenever he talks about his paintings, he talks about the environmental messages they convey, and those who have heard him speak have clamoured for a book that encapsulates his philosophy. --Thinking Like a Mountain is the result of many years of thinking, talking and writing about the world's growing environmental crisis. Beautifully designed and illustrated with original drawings, it is a gathering of questions, observations and ideas Robert Bateman has drawn from his own life experiences and gleaned from the writings of some of the visionaries who have influenced him. --As Einstein said, "We cannot solve the problems of today with the same thinking that gave us the problems in the first place."Only a profound shift in philosophy, Bateman believes, can save our species from extinction."---, contents include: Preface; PART ONE: Getting to Know the Neighbours; A Day in May; Portrait of the Artist as a Young Birdwatcher; My People; The Call of a Wolf; Roving around the World; Getting to Know the Neighbours; Natural Art; Aristocrats of Time and Space; PART TWO: Message in the Bones; Message in the Bones; The Grapes of La Mancha; If a Tree Falls; A Village Story; Homo sapiens Teenager consumerensis; Small Is Beautiful; Unholy Alliance; Natural Capitalism; Beyond the Rapids; PART THREE: Signs of Hope; An Alpine Idea; The Grameen Bank; Nigerian Public Transit; The Ecology of Cities; Holy Alliances; From Tortoise Islet; Good People; A View from the Mountain;More Food for Thought; Acknowledgments, any image directly beside this listing is the actual book and not a generic photo ///SIGNED ---GUARANTEED to be AVAILABLE///

Title: Thinking Like a Mountain -by Robert Bateman -a Signed Copy

Thinking Like a Mountain -by Robert Bateman -a Signed Copy