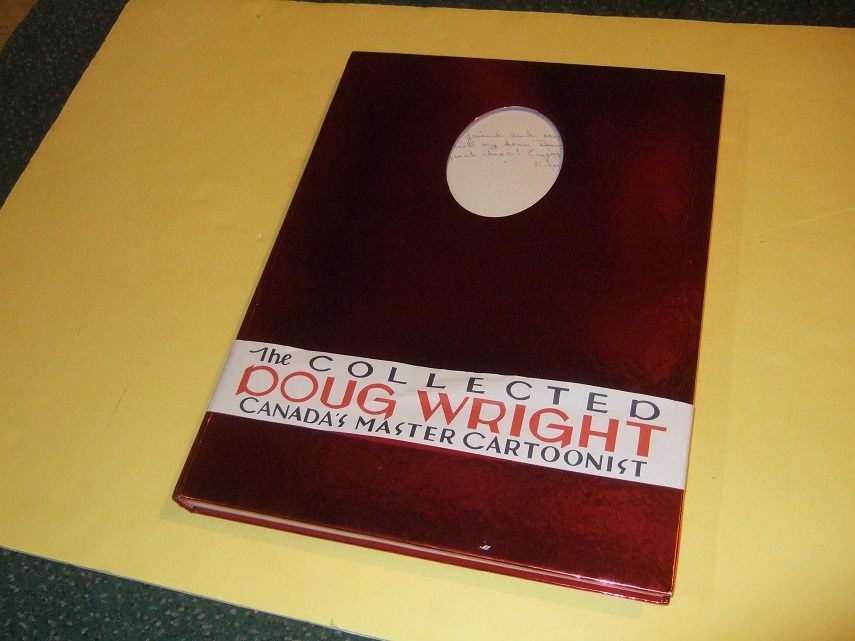 ----------hardcover, a Very Good+/Near Fine example, some faint rubs and scuffs to the red foil type boards, some small flakes, belly band is present but is slightly crinkled, this copy has been signed and inscribed by Doug Wright's wife Phyllis " For B____ A very good friend and neighbour who supplied my dear Doug with so many great ideas! Enjoy Phyl.", 240 pages, colour and b&w cartoons and strips throughout, ---"A career-spanning retrospective of one of the masters of North American cartooning. The first of a historic two-volume set, The Collected Doug Wright: Canada's Master Cartoonist presents the first-ever comprehensive look at the life and career of one of the most-read and best-loved cartoonists of the 1960s. Compiled in cooperation with Doug Wright's family, it draws from thousands of pieces of art, pictures, letters, and the artist's own journals to provide a fully rounded view of Wright, both as a cartoonist and as an individual.Volume One follows the artistic development of the British-born cartoonist from his earliest unpublished work to the first days of his most enduring comic strip, Nipper. First published in 1949, a full year before the debut of Peanuts, this wordless strip perfectly captured the humorous--and frustrating--side of parenting for several generations of both young and old. Remembered by many for Wright's cartoon children's striped shirts and bald heads, Nipper quickly grew into a Canadian signed by the acclaimed cartoonist and Peanuts designer Seth and featuring a biographical essay by the writer Brad Mackay, this lavish hardcover collection gives Wright's career the recognition it has long been due. The introduction is by one of the most famous working cartoonists today, Lynn Johnston of the syndicated heavyweight comic strip For Better or For Worse."I don't think I'd have had the basics needed to do a syndicated comic strip had it not been for Doug Wright" (Lynn Johnston, from the introduction)"---, any image directly beside this listing is the actual book and not a generic photo ///SIGNED ---GUARANTEED to be AVAILABLE/// ---PLEASE SEE OUR listing for ORIGINAL DOUG WRIGHT artwork/cartoons ---