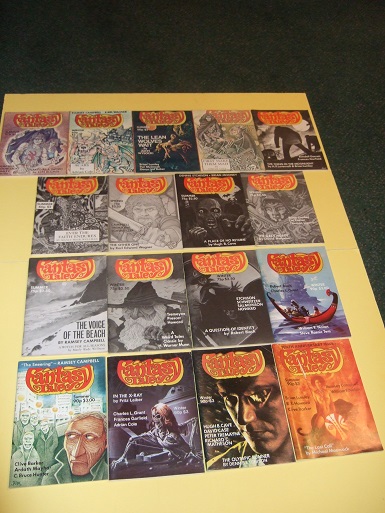 -----------17 volumes (ONE SHIPPING PRICE ), softcovers, about 6w x 8.25h inches, all are Very Good+ to Near Fine copies with most being Near Fine, first 4 issues are perfect bound (glued) whilst the remaining 13 are stapled (as issued), all with stories and verse from the leading fantasy and horror writers of the day (many of whom are still writing, issue # ONE (ONLY ) has been signed by Jones, Sutton, Campbell and Bulmer, ---authors include: Gordon Larkin, John Grandfield, Eddy C. Bertin, Brian Lumley, Michael Moorcock, Brian Mooney, Steve Sneyd, Adrian Cole, William Thomas Webb, Ramsey Ca...
View More...